Jonathan Lane works on his own

In different times, such a statement about an artist, about the way and the why artworks are made, would have sounded obvious, and therefore quite meaningless. Most artists whose names figure prominently in the pages of history books, those who give meaning to what museums collect and conserve, are often thought to have been lone gunmen. And perhaps some of them were. But many more depended on clients and patrons to support them, most importantly by ordering works using as many hands as were needed to represent their own wishes and desiderata, their own importance, rather than acquiring what was spontaneously produced. The need, or at least the desire for a network is nothing new. But nowadays it has developed into an extremely entangled web spreading always further through galleries and social networks, through news, events, publications… Many of the well established artists of our time depend on this, and their works often seem to be following the information flowing through those networks rather than gliding freely over such pre-established guidelines, as they attempt to cope with whatever is expected from them. Great expectations to cope with, then, but also to satisfy, surf upon and use to one’s advantage.

Erase. Rewind. Again : Jonathan Lane works on his own

In his early years, there was something rebellious in his paintings. Not in the Hollywood style meaning of the word, though: Lane is too British for that. Britain gave birth to the punk movement, not to superhero wannabes. Lane’s rebellion was discreet. Smooth, one might say. His painting quietly achieved this status by simply keeping a certain attention for the same elements the art world of the time was trying to reject as déjà vu, in order to support a constant fuite en avant which considered anything belonging to a definite period of art history as scorched earth, never again to be walked upon. Lane’s point was not to get back to the 19th century movements, as a narrow minded viewer might think while looking at these early paintings and noting their small figurative formats, their use of specific and quiet colours to represent urban spaces and therefore side-step a certain type of energetic abstraction and agitated gesture, then in favour among art teachers and art critics alike. Rather, this was the sign that, at an early age, Lane already had no intention of following anyone else’s dos and don’ts. Not that they were better or worse: they simply weren’t his.

Beyond the rebellious thought, though, were the first bricks of what would become the bedrock of Lane’s work. They represent cities, streets and façades; over the following years, many of his paintings would follow this path, taking him to Venice, Fez and other places. And this is how his intentions became clearer: wherever he went, wherever he stayed and painted, the place and the space appeared more and more defined as simply a medium through which he could strain and express his inner thoughts. What was important was not the place, but the angle, the depth and the presence all generated not by what it was, but by the way Lane looked at it, the way his mood at that precise moment echoed with his surroundings. Like mirrors, the cities would reflect his mindset, but also his feelings, providing him with a way to lay them on canvas for others to find. And indeed, as soon as one starts to engage with a painting from this period, the veil of the facades falls, the matter and the shapes dissolve, giving access to the omnipresent humming sound of Lane’s own life at that precise moment.

Little by little, Lane moved away from the human construct of cities, following the certitude growing in him that the feelings and thoughts he shared with the streets were actually a question of light, movement and temperament, distance and proximity – all matters that could be experimented elsewhere, outside of handmade urban limitations. All matters that didn’t need to already deliberately exist, to have been built, were attractive. Architecture is a thought, but it’s the thought of others, a thought attached to a past moment, a period, a need for a framed zeitgeist. Lane started to move away from this thought just as one moves away from unwelcome disturbances and noises buzzing around, focusing on what was, what spontaneously existed and fed his mind directly, through views and lights, presences, perception through open or closed eyes.

Trees. Trees live long, and slow. Trees don’t ‘do’, they simply ‘are’, and the radiations this existence releases fed Lane’s head with waves of images detached from simple, direct representative perception. In his paintings, layer after layers, through thin, often matte and dry color touches which remain from an imperceptible gesture, one can feel his exchanges with the proximity of trees in the same way; difficult to conceive, physics explains light is both wave and matter while being neither. These paintings support this in the strictest sense. Something that cannot be explained or clearly perceived is nonetheless, undeniably, there. And it speaks of nature as it speaks of time, of reality as it speaks of perception. An echo of Lane’s inner thoughts expressed through a forest induced X-ray of his mind. While facing these paintings, undeniably representing trees, it takes only a snap in time to see and feel human, alive, a snap, as silent as it is deep, a here and now solidifying an instant of their author’s life, if solid makes any sense here.

Then came 2020 – 2021, the dreadful time when moving around became scarce, and thoughts were locked up in the studio for months. Just as autumn lets the leaves decompose on the forest soil, among tree trunks, dead branches and cold raindrops, the impressions Lane had collected started to stratify into visual layers, monochromatic and quiet, superficial yet thick. Patiently, experimenting with papers and liquid pigments, more often that not incompatible (but that was the point!), he laid down the steadiness his personal perception of outer trees and plants had left in him. Those became rhythms, almost tactile spreads of natural history. A history of one, for one. A deep instant becoming abstract.

Slowly came the understanding that these histories, as Lane put them down, were made to remain, but to remain out of any obvious vision, which would inevitably have blurred part of the unexplainable thoughts forests and spaces had seeded into them through their author. So he cut them into rectangular pieces like one cuts paper into pages before binding them as a book. Unbound, but deposited under glass in a box, they remain as the intangible element of what had happened and what was felt, leaving the understanding of those who come across these works to be guided by a scale one copy in a frame next to it. What is in the box is explained and understood, but will not be seen directly, ever again. And so it stays, as it was and always will be.

This is Jonathan Lane’s work, undeniable, unavoidable specificity: at a time when many speak for nothing and need to constantly show something, spread something, collect something – many things, indeed, with not much interest, Lane’s paintings and archives are an extraordinarily rare way of keeping tied, a while longer, to a world on the verge of dislocation.

We judge art (and the artist) by how the unique expressions and technical achievements come together in images meaningful to the viewer. Jonathan Lane’s art is bare, he says, obscuring narrative. He thinks and paints in series, meaning each work is an episode, substantive in the singular but meaningful also in the collective. He does not paint portraits or the human form. Yet Jonathan is wrong about his work not expressing narrative: each series does tell stories – both for the artist and for the viewer – but they aren’t necessarily the same.

Lane’s works are filled with recognizable and unrecognizable forms. The artist uses skill, instinct and technique with a palette of closely related colors to move the viewer into recognition and reflection. His talent lies in taking the familiar – water, trees, mountains, and buildings – to render it unfamiliar through subtle and dramatic use of tones, often of the same colour. His study of the water of the Marseille Calanques marvels the viewer with the many different blues of the Mediterranean: its light blue spray, its marine darkness, and its troubled currents.

Lane’s work promotes peace through lack of resolution. Any one of his pieces can be judged for expression and technical achievement. But seen together, as series, one sees his perceptive depth and range, recognizing his burgeoning trajectory as  painter.

His current work captures the regal beauty of trees, their complexity, their irreducibility; the way a tree stands unique, proclaiming something fundamental about the nature of the world.

The viewer wants to sit for hours with a Lane painting. Just as you think you have seen everything in a Lane canvas, its arresting balances of light and color, shade and tone draw you back in. A Lane canvas affords the viewer a return to the state we were once in when the familiar was still unfamiliar. To see through Lane’s eyes – to see what he has translated into art – is to see something as familiar as a tree or water for the very first time. 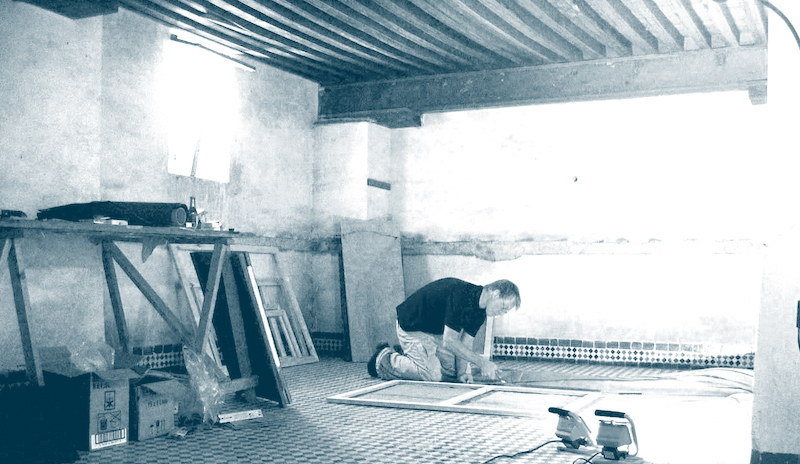